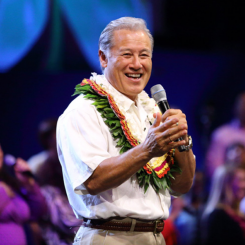 How then shall we live?

As the Church, we are deeply disturbed, brokenhearted, and grieved whenever a sacred life is needlessly taken, and now we add George Floyd’s name to an ever-growing list. We cannot be complacent about these injustices.

Our tendency is to always side with the victim, and like many, I too am weary of the escalating abuse of authority.... regardless of color. I know some get polarized or upset when they hear the phrase, “Black Lives Matter.” Of course, ALL lives matter, but all lives won’t matter until black lives matter. And by the way, so do blue lives, white lives, brown lives, every life. This multi-colored list is cannot be categorized by hierarchy or importance; however, different seasons may require different emphases in order to bring clarity and to restore balance.

What makes issues like this one even more problematic is that it is not simply a problem of black vs white. It is the rise of an entitlement mindset, the systemic abuse of authority which never seems to be equally nor justly reprimanded. The only thing that seems equally common is that the higher the authority, the less the accountability. Equally disturbing is that it that common people have little or no control over the authority’s abuse that stems from greed, misogyny, racism, selfishness, or avarice.

We are like the children of Israel awaiting a Moses to rise up and balance the scales.

However, our grief over injustice will never be ameliorated through retaliation and revenge. Retribution never restores. It simply moves us one step closer to anarchy. We have all seen innocent people’s stores and homes torched or destroyed because of an unjust incident that remained unsettled. We have witnessed people smashing police cars and looting innocent businesses, and what started off as a peaceful protest can morph into a dangerous mobocracy. It gets worse when we discover that professional mercenaries, trained disrupters, have infiltrated the ranks of those crying out for justice. Now their tears are mixed with unwanted and uninvited political agendas, and all sides can become hosts to error, abuse and unaccountability.

However, underneath it all, we will discover that the enemy of our souls has been covertly working both sides. It’s time we unmask the real enemy and awaken to the fact that he’s hoodwinked us by turning us against ourselves. The bible reminds us in Ephesians 6:12: “For our battle is not against flesh and blood but against the rulers, against the authorities, against the powers of this dark world and against the spiritual forces of evil in the heavenly realms.” Although the enemy has been defeated, it doesn't mean he’s inactive. He hides behind injustice and prejudice until it becomes a disheartening and unfair binary war: black vs white.

But it is far from being black and white. It is much more complicated. It reaches further than the pigment of my skin. It goes as deep as the human heart, and if you haven’t noticed it yet, all human hearts have the same color. However, the crux of the problem is that they don’t all have the same condition. We blame it on color, but it is really "condition". Allow me to explain.

The Bible reminds us that all evil comes from the heart, not the skin. “For out of the heart proceed evil thoughts, murders, adulteries, fornications, thefts, false witness, blasphemies: These are the things which defile a man.” - Mt.15:19

It wasn’t a white knee that forced itself on George Floyd’s neck. It was an uncaring, abusive heart that was. It's a widespread “heart disease” that has been killing us from the inside out. It wasn’t a white knee or black knee. It is knees that refuse to bend before God’s sovereign claim on our nation.

We all have to admit: our collective hearts have strayed far away from God. We have excommunicated Him from our courts.  We banned Him from our schools and reasoned him out of our colleges. We prohibit Him from dabbling in our businesses … and then we wonder why our nation is so ungodly? But isn’t that exactly what we wanted in the first place so we could live as we wish without God disturbing us? The ancient book of 2 Chronicles 15:2 reminds us of a chilling consequence: “If you forsake God, He will also forsake you.”

If we don't have the presence of God in our lives and hearts, activism won't matter. We can pass more stringent laws against racism, but legislation will never change the human heart. God alone can do that. Without God, even our best efforts will contain the viruses of a fallen humanity, and over time, we not only become more evil, but evil will become more subtle and furtive.

I grieve for the families and friends of those whose lives have been taken—people like George Floyd, Breonna Taylor, Ahmaud Arbery, Sandra Bland, Atatiana Jefferson, Botham Jean, Tamir Rice and Trayvon Martin and countless others.

We cannot allow silence to render us complicit. As truth-seekers, we are called to recognize these tragedies for what they are: the systemic evidence of the far-from-God heart that surfaces in racism, injustice, and the abuse of authority. As Christians, we are called to uphold the worth and dignity of all people and seek justice while not using it to give ourselves permission to disrespect and retaliate. We condemn racial and judicial discrimination in all forms.

So, we have two choices:
We pray for healing. We pray for revival.  We pray for forgiveness and change.  But most of all, we pray that as a nation, we would collectively repent and invite God back into our hearts, our communities, our churches ... and humbly pray, not with neat platitudes, but with heartfelt sincerity: "Father, forgive us our sins as we forgive those who sin against us, and lead us not into temptation, but deliver us from evil.”
- Pastor Wayne Cordeiro