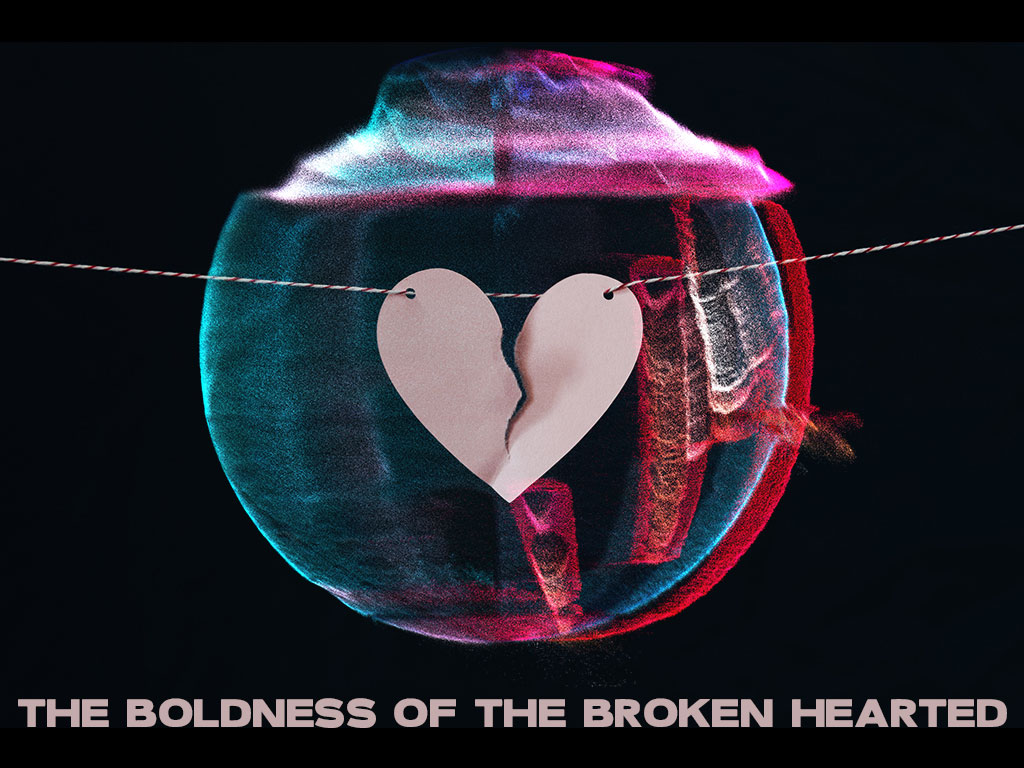 The Boldness Of The Broken Hearted

12When we heard this, we and the people there pleaded with Paul not to go up to Jerusalem. 13Then Paul answered, “Why are you weeping and breaking my heart? I am ready not only to be bound, but also to die in Jerusalem for the name of the Lord Jesus.” 14When he would not be dissuaded, we gave up and said, “The Lord’s will be done.” Acts 21:12-14

In Macedonia (Acts 20:22-23), in Tyre (Acts 21:4), and here in the city of Caesarea Paul is warned by The Holy Spirit that what awaits him in Jerusalem is prison and pain.  In each instance the people that love Paul plead with him not to go.  They don’t want to see their friend and pastor go through this.  Who can blame them?  Why didn’t Paul listen to them?  Their hearts were broken in the letting go.  His heart was broken in the leaving. Ultimately, Paul’s heart belonged to the Lord.  Ananias had prophesied from the day of Paul’s conversion that “This man is my chosen instrument to proclaim my name to the Gentiles and their kings and to the people of Israel. 16I will show him how much he must suffer for my name.” (Acts 9:15-16). These prophetic words were being interpreted by Paul’s friends through empathy and sympathy but not by the Spirit of God.  They read these words as prevention.  Paul received these words as preparation and confirmation.  He was willing to live with a broken heart to reach the hearts of the Gentiles and those in positions of authority. He valued relationships as Acts 21 describes in the original Greek a literal “tearing himself away” from the elders in Ephesus.  Paul valued His relationship with His Savior above all else.  Ultimately where the church in Caesarea finally concluded “The Lord’s will be done” is how Paul lived his life from the day of his conversion.

I think of the words of Jesus to His disciples in Matthew 19:29:  “And everyone who has given up houses or brothers or sisters or father or mother or children or property, for my sake, will receive a hundred times as much in return and will inherit eternal life.”  It’s pretty clear that to surrender my heart to Jesus is to encounter a broken heart with others.  My loyalty to my Lord must supersede my loyalty to others.  I won't hold back from ministering with a whole heart, but only God holds my whole heart.

One of the hardest things we’ve ever done was to leave our New Hope Seattle Ohana of 10 years to move to Kona to pastor New Hope Legacy.  Because we had planted that church we knew every single person's story who was there.  When I read of Paul leaving Ephesus in tears I know exactly how he felt.  To make it even more painful most of my family and Cyndi’s family had relocated to the Northwest over the years.  To move to Hawaii was to ask our boys to leave the only life they’d ever known and to leave their family and friends.  I remember every tearful meeting with our leaders that we had served in the trenches with for ten years.  Now, granted, we were being called to Hawaii, not prison in Rome.  Paul had it much harder.  I remember very distinctly having waves of grief wash over me in the first few months in Kona as I thought about my family, friends, and church that were now so far away.  Yet, I never for a moment doubted this was God’s will for us.  He had confirmed this move in many ways and so, even in the midst of the pain, the path forward was clear.  Though some in positions of leadership over me questioned whether this was actually the Lord leading us Cyndi and I and the boys knew this was what God was calling us to do.  Out of the brokenness came a boldness.  Now, almost five years later, I can see what God was leading us to that I would completely have missed out on if I had held on to my heart instead of surrendering it to Him.  Obedience to the Lord will lead to a broken heart, but it is out of the broken heart of obedience that many hearts will find salvation.

On this Valentines Day, I freshly surrender my heart to You Lord.  It’s especially on Holidays that I miss being with my friends and family from the Mainland.  I thank You that they love us so much but love you more.  To this end, they have been supportive of us through this whole journey away from them but into Your will for our lives.  I pray that you would remind me of this lesson to hold loosely to people and hold tightly to you so that I don’t prevent someone from what you are preparing them for simply because I don’t want to see them go.  To hand You my heart is trusting You even over my emotions and even when I don’t understand why.  May I be even bolder in my proclamation of the Good News that A Good God has come to heal our broken hearts.